Best Pellet Grill for Searing: These 5 Get HOT!! 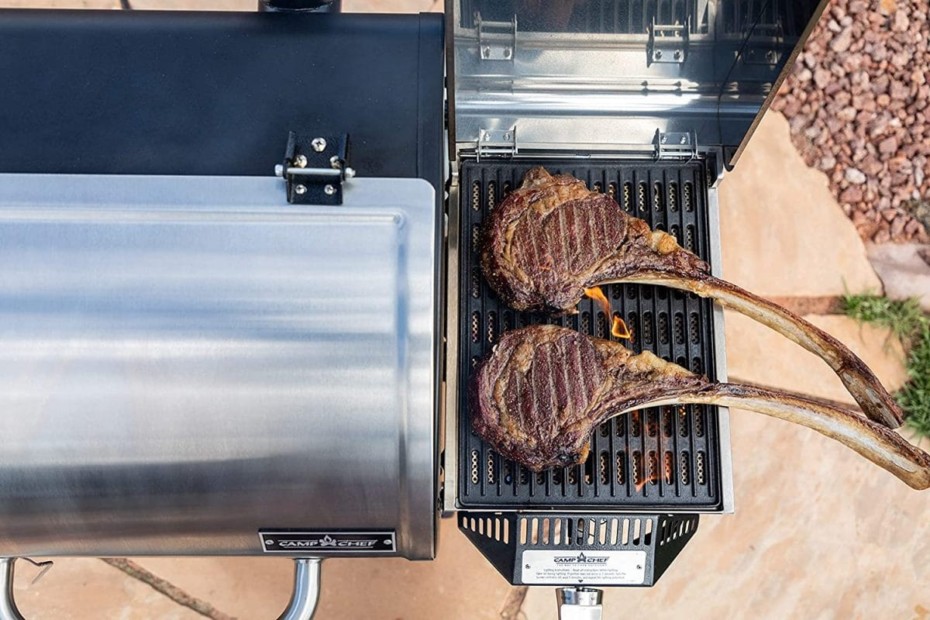 Pretty much all pellet smokers say you can grill on them. But, as you probably know, the indirect heat you get on most isn’t ideal for searing. Yes, it works. But, it’s sort of like trying to grill a steak in a really hot oven. It’s really not ideal.

Thanks to demand and growing innovation in the market, you now have options.

Some pellet smokers can actually do both with dual modes for indirect low and slow heat for smoking and direct high-heat for searing.

It can be time-consuming to find which models are actually set up for both indirect and direct flame modes. So, we’ve put together an assortment of the best.

All of the pellet grills here don’t do anything in halves. They’re ideal low and slow machines, and, you can open them up to sear over a real wood-flamed fire. They are the best of both worlds. And, there’s options to suit all budgets. 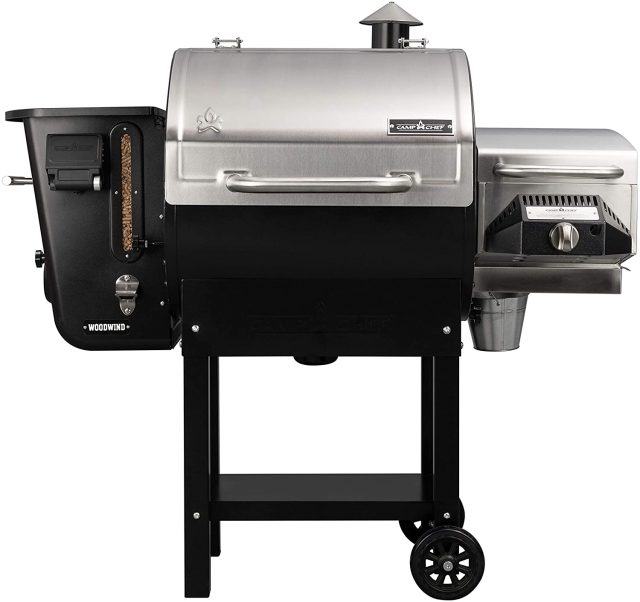 Camp Chef’s Woodwind range is our leading choice when it comes to an all-in-one pellet smoker and grill solution.

Firstly, the Woodwind Pellet Smokers have a Slide and Grill lever that lets you open up slits in the heat deflector so you can grill right over the pellet fire. It next-levels the results, gets that much hotter, and, still gives you a bit of naturally wood-smoked flavor without using the exorbitant amount of pellets you need to get a regular pellet smoker up to maximum temperature and keep it there.

But, you can also get awesome propane add-ons that replace the side-shelf on the Woodwind and give you another option for grilling and searing too.

One of these is the Sear Box which gives you a cast iron grate that hooks up to a gas bottle for up to 900°F of heat and incredible sear marks. And, the other is the Sidekick which is a propane-powered single burner that lets you add a griddle, grill, oven, stock pot, or more.

So, with the Woodwind, you get way better grilling on the regular pellet-powered side. Plus, the ability to link up a smaller gas grill on the one barbecue. It’s really versatile and very well built.

The Woodwind Series also has WiFi, a PID temperature controller for the most precise heat control, a more durable stainless steel firebox and lid, plus, a separate Smoke Number setting where you can crank the smokiness up or down independent of the temperature.

They’re amazing to use. And, there’s a choice of 3 different sizes to suit your needs and budget. All come with an impressive 4 meat probes and a full color screen controller.

Specs for the Camp Chef 24" WiFi Woodwind with Sear Box 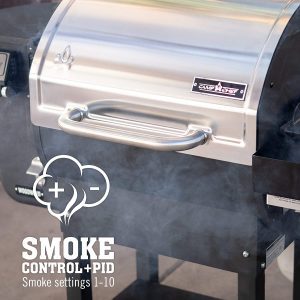 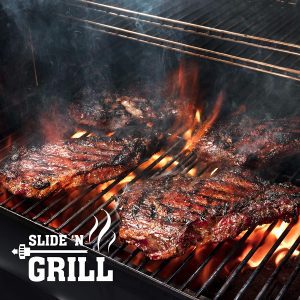 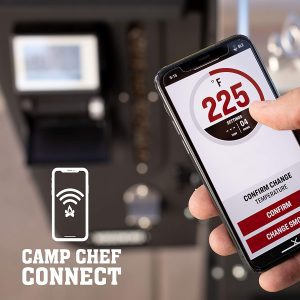 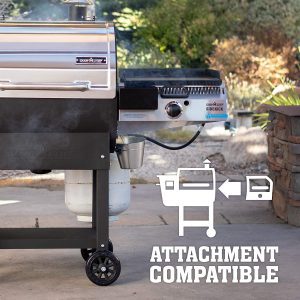 Pros of the Camp Chef WiFi Woodwind with Sear Box:

Cons of the Camp Chef WiFi Woodwind with Sear Box:

Next up we’ve got the Pit Boss Navigator. This one’s similar to the Camp Chef in that it’s got a Slide Plate Flame Broiler so you can open up the drip tray to get the wood-fired flames rolling through.

Because of that, it gets extra hot and is another great choice for anyone who wants good searing or grilling on a pellet smoker. But, there’s no propane-powered attachment so you’re doing all of your cooking on the one grate (unless you go with the Navigator Combo which halves the smoking space with a propane grill)

Good things about the Pit Boss Navigator are that it’s built from heavy-gauge steel. It is that little bit thicker and heavier than most pellet smokers at this price level, giving good heat retention and sturdiness.

Unlike the Camp Chef Woodwinds, the Navigator has a regular temperature gauge so you’re going to get a bit more fluctuation in temperature. The plus of that is that it’s pretty smoky if you like a stronger flavor in your meat.

Size-wise, there’s three options to suit with large pellet hoppers. And, you’ve got a front and side shelf for maximum working space.

Overall, the Navigator’s a good, strong smoker that does a fine job of both low and slow and high heat searing. Compared with the Camp Chef, there’s no WiFi and fewer probes. But, it’s priced a little lower for a very durable smoker. It’s definitely not a second-rate choice! 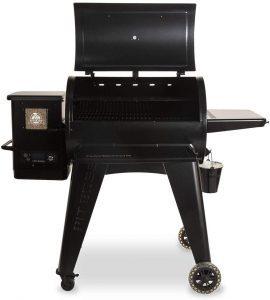 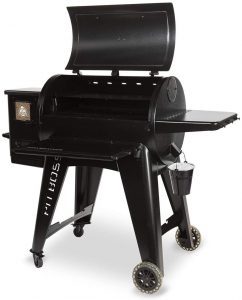 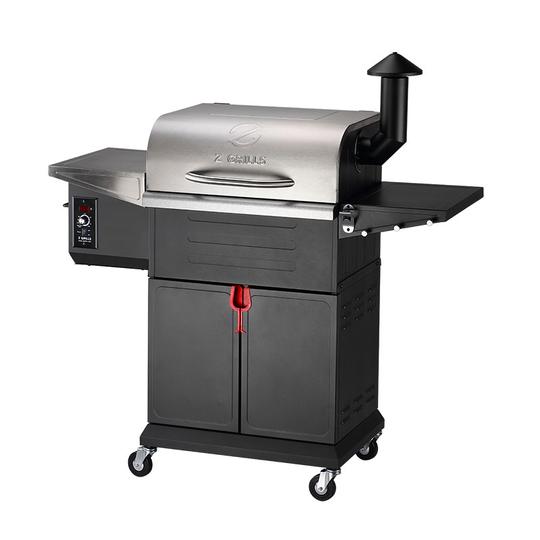 Coming in at one red hot price is this neat little option from Z Grills, the Flame Elite 600D3E.

Holding a smaller but still reasonable capacity of 572 square inches (about 24 burgers or 4 whole chickens), the 600D3E has a precise PID temperature controller like the Camp Chef’s. And, there’s a fire access door so you can bump the temperature up to 750°F with direct flame access for better grilling and searing.

The metal’s a little thinner than you get on the Pit Boss. But, don’t be put off by the lower price! Z Grills is a top notch option (and, one of our favorites). The temperature distribution is remarkably even, you get a stainless steel lid, side shelf and enclosed storage cabinet for such a great price.

To us, the only real negative about the 600D3E is that the pellet hopper’s a little smaller too. It holds 8 pound of pellets which will give you around about 8 hours of low and slow smoking time so you’ll need to refill for longer cooks.

There’s also no WiFi if that’s a deal-breaker for you. We really don’t mind because Z Grills are so consistent and reliable anyway.

Use our exclusive code – 5%off – at the checkout for 5% off anything Z Grills, including already on sale smokers! 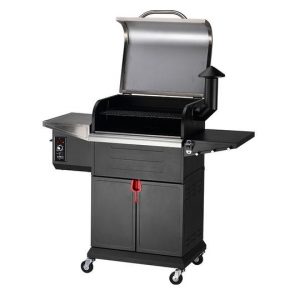 Use our exclusive code – 5%off – at the checkout for 5% off anything Z Grills, including already on sale smokers! 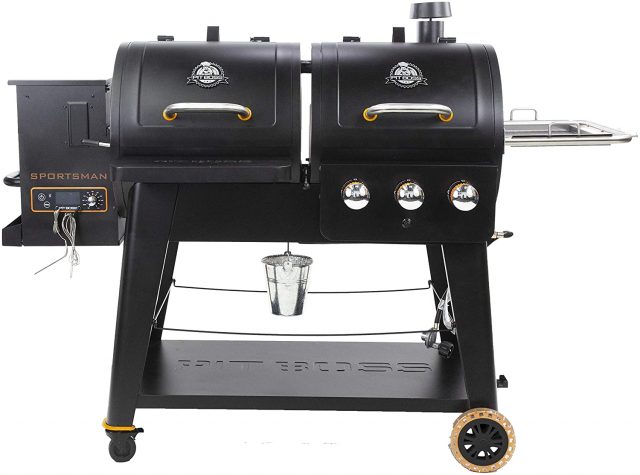 If you’re understandably a bit unsure about buying a single pellet smoker that claims to do it all, going for a full-sized combo might make you feel more comfortable. And, when it comes to combos with pellet smokers and propane grills, we are fans of Pit Boss’s Sportsman Combo.

On one side you’ve got about 630 square inches of set and forget, wood-smoked cooking space. And, the other gives you another 630 square inches to grill and sear as well. It’s versatility and total convenience all wrapped up into a strong and durable barbecue.

On the pellet side, you’ve got a regular temperature controller powered by a large 21 pound hopper. The cooking space is split over two shelves so you might need to remove the top one for larger meats, cutting the size down again. But, there’s two meat probes to monitor your progress plus a prime button to boost the heat quickly after opening the lid.

For grilling and smoking, you’re looking at 3 independent burners giving you a total of 30,000 BTU’s. Like the smoking side, the cooking space is split over two grates. So, while the top’s good for warming or doing sides, your actual grilling space is limited to just over 300 square inches.

It’s enough for most people. But, just something to keep in mind when working out if a half/half solution is right for you. 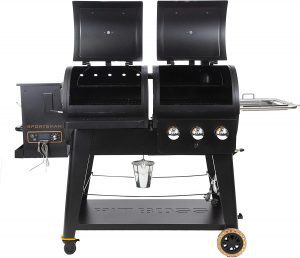 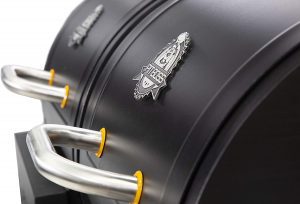 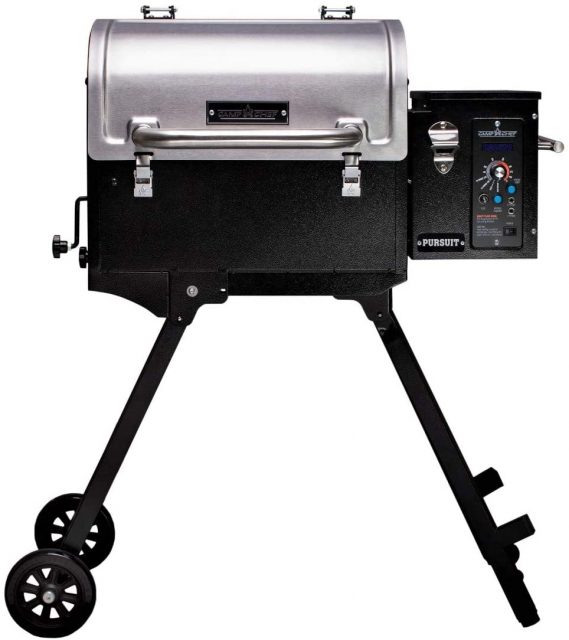 Last but not least, we’ve got a portable option that makes the cut as one of the best pellet smokers for grilling.

It’s the Camp Chef Pursuit Pellet Smoker. And, like the Woodwind’s reviewed above, the Pursuit also has Slide and Grill Technology so when you’re ready to reverse sear, or, just want to fire up some burgers fast, you can slide the lever and get access to the extra heat of the direct, wood-fired flame in the firepot.

But, the Pursuit’s got a lot of other things going for it as well.

Firstly, it’s actually very sturdy for a portable smoker. The legs fold in with the push of a button and the lids lock, turning the whole grill into a rolling suitcase that’s actually easy to move.

The temperature’s reliably controlled by Camp Chef’s updated PID-based system which also lets you set the smoke level independently of the heat. And, there’s 2 meat probes included so you can monitor your meat’s progress directly on the control panel for perfect results every time.

As you’d expect on a portable model, the cooking space is reduced to 501 square inches. It’s still enough to do 4 racks of ribs at a time, 4 pork butts, or a brisket. But, the hopper’s also a smaller 10 pounds.

From that you’ll get about 10 hours of smoke time before you need a refill. So, it’s still enough to do overnight cooks with a refill in the morning.

Even though the Pursuit’s a portable model, it’s definitely large enough and sturdy enough to use regularly at home as well. So, it’s also a good option for the budget-conscious buyer who’s still after a lot of features and great function. 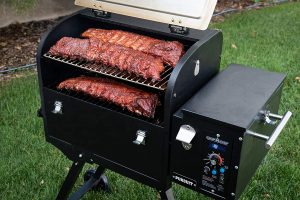 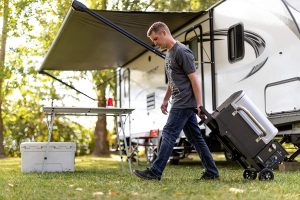 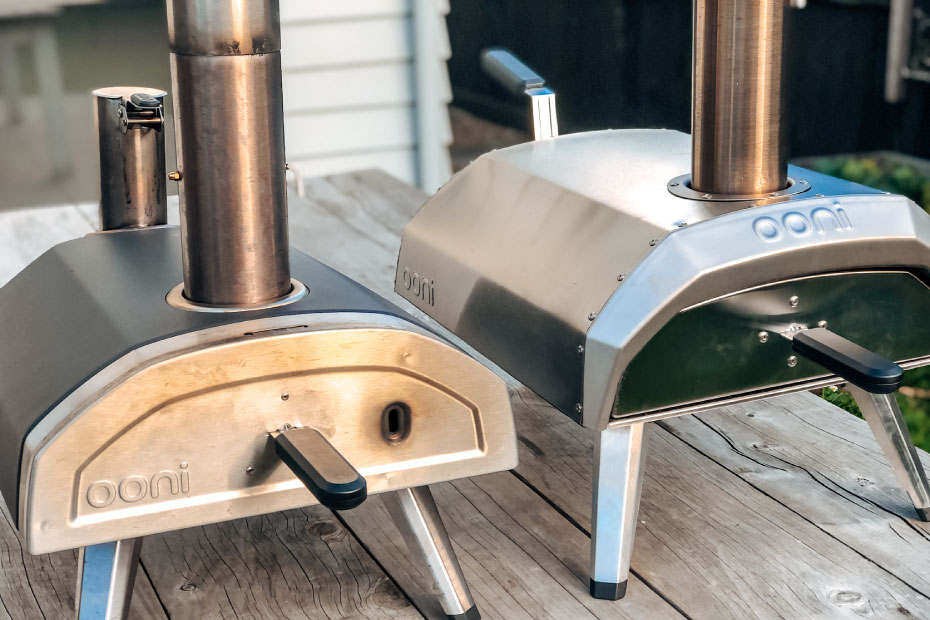 Yes!! You’re getting an Ooni! You’ve just got to choose which one to get… It’s a good decision to have to make. Both of these… Read More »Ooni Fyra vs Karu: Easy Pellet-Fired or Real Wood + Options? 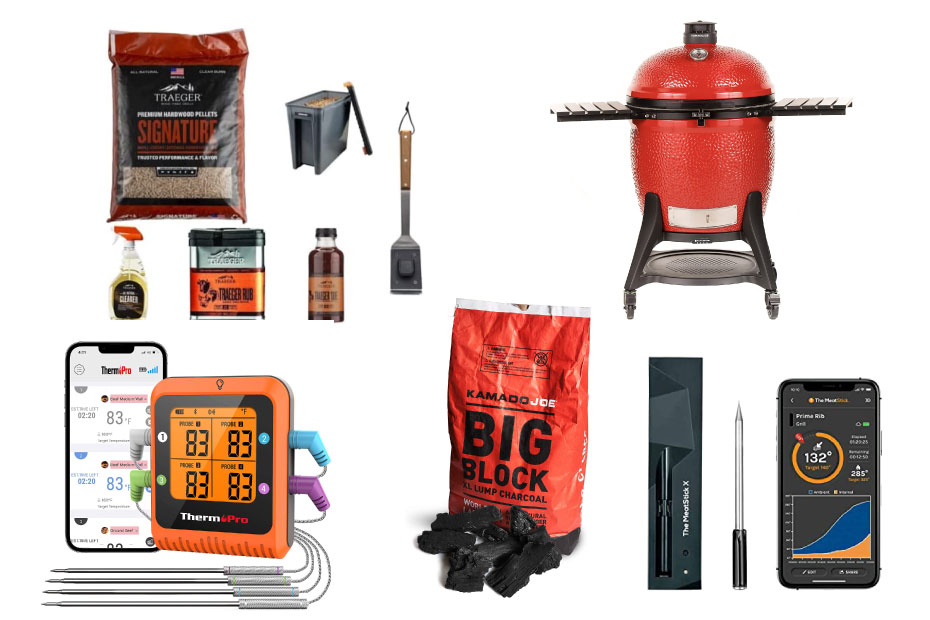 Prime Day is one of the best times of the year to pick up a deal on a new barbecue, grab that new accessories you’ve… Read More »Best BBQ Prime Day Deals 2022: Smokers, Fuel, Accessories

Pit Boss K22 Review: Is This Cheaper Kamado Any Good?

We get it… Real ceramic kamados are EXPENSIVE! Yes, they’ll last a lifetime and they’re amazing to cook on. But, buying one in the first… Read More »Pit Boss K22 Review: Is This Cheaper Kamado Any Good?