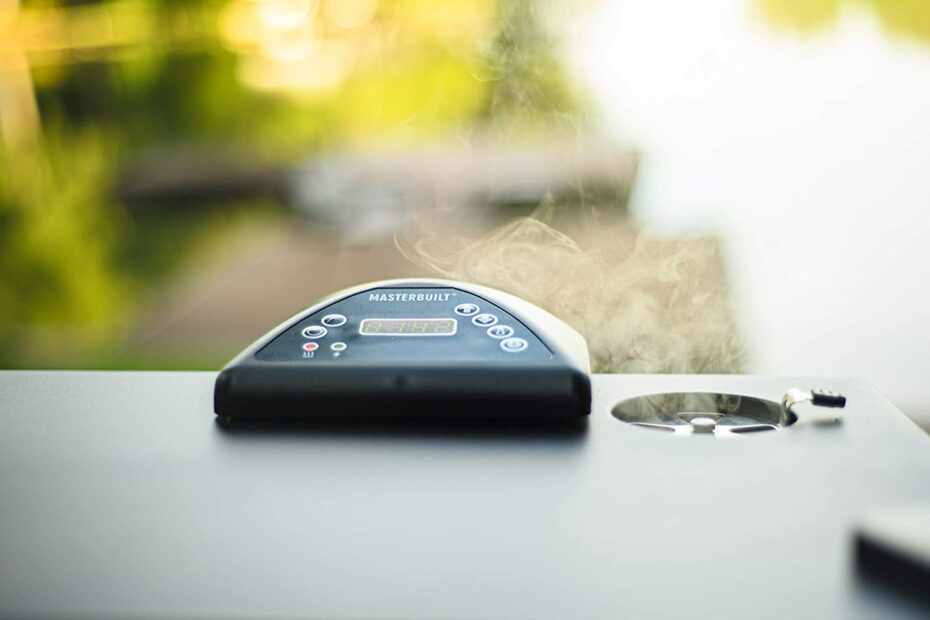 There’s so much choice when it comes to electric smokers! A heap of different brands offering different wattages, sizes, and, other features. So, if you know you want electric and you’d like the extra precision that digital gives you, you’re on the right page.

In our best digital smoker review, we’ve sorted the top choices from the rest to give you confidence in what you’re buying, without having to do the hours and hours of research and testing we’ve done.

The digital electric smokers here have been recommended based on their performance, reliability, features and user reviews. Regardless of what size you need and the budget you have, you’ll find something here to suit. 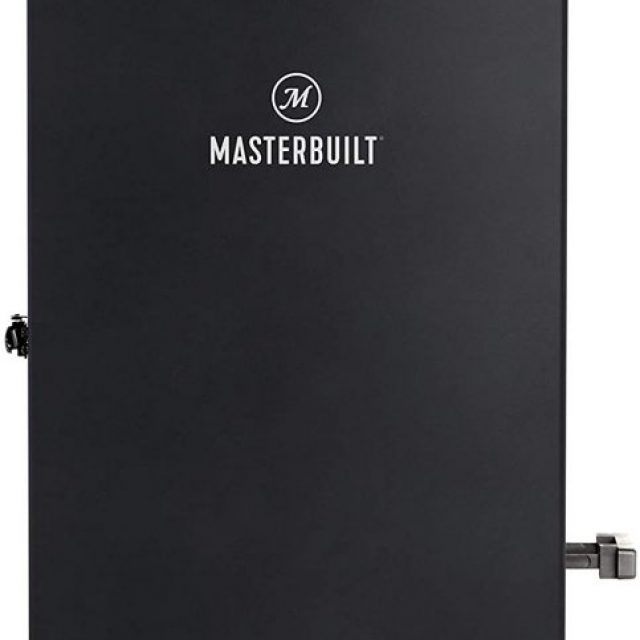 The bestselling smoker from industry leader Masterbuilt, you can’t go wrong with the ease and consistency you get from the MB20071117.

Also known as the MES 130|B, this smoker does exactly what you need it to without unnecessary and expensive features.

The 800 watt heating element is powerful enough to heat it’s 711 square inches of cooking space. And, the body is fully insulated for maximum heat retention and great performance, even when the weather is cooler.

The digital controller is allows you to set the temperature exactly where you want it while the thermostat reliably keeps it there. The side-loading wood chip port lets you add more smoke without opening the door, disrupting the heat inside.

But, if you don’t even want to do that, you can get Masterbuilt’s Slow Smoker attachment that will automatically feed wood chips into the smoker for up to 6 hours. It’s also great for cold smoking and has a removable ash tray for easy cleaning.

In terms of layout, you’ve got 4 cooking racks set over a water and drip tray, wood chip tray and heating element. It’s enough to fit 4 chickens, pork butts or racks of ribs. Or, you can even remove 2 of the racks to cook 2 whole turkeys.

But, go and check out the price! The MB20071117 is a steal. It’s performance and quality for the price is next to none.

Specs for the Masterbuilt MES 130B 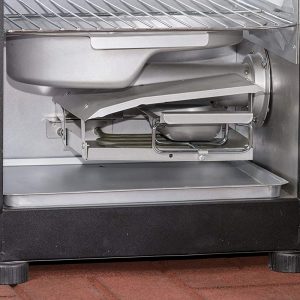 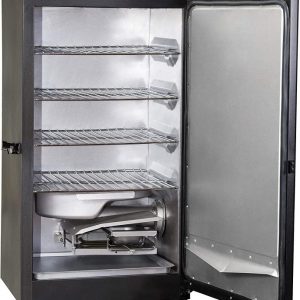 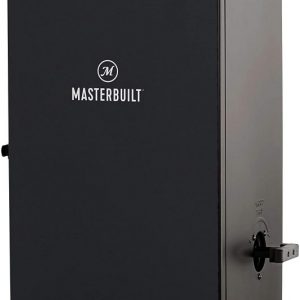 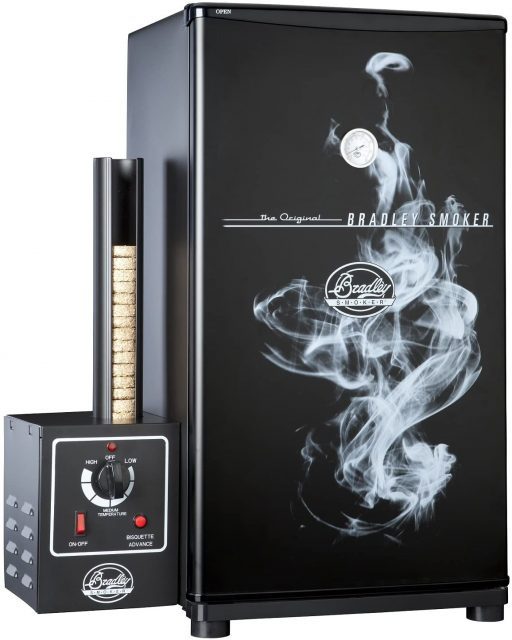 For the most clean and pure smoke production in electric cooking, the Bradley Digital Electric Smoker is unbeatable.

They work slightly differently from traditional electric smokers. Instead of putting wood chips over a heating element to create smoke, there’s a dedicated smoke box with it’s own heating element that burns their 100% natural Wood Smoking Bisquettes for clean and consistent smoke throughout your cook.

Once the Bisquettes have been smoked for an exact amount of time, they’re actually doused before the wood turns to ash so you don’t get any bitter and toxic byproducts filtering through your food.

The result really is a much better smoke quality on a type of smoker that’s typically harder to get smoking well.

But, healthier smoke isn’t all. Using the Bradley Bisquette system is way easier as well. You can get up to 9 hours of smoke time where you literally don’t need to touch a thing. It’s simple, easy, a bit more expensive, but, ultimately a better product.

The size is a little smaller, but, similar to the other electric smokers on this list. It’s fully insulated for efficient performance in cooler climates. Oh, and, the inside is all stainless steel for improved durability as well.

You really are getting a quality product with a Bradley Digital Smoker.

Temperature range: Up to 250°F 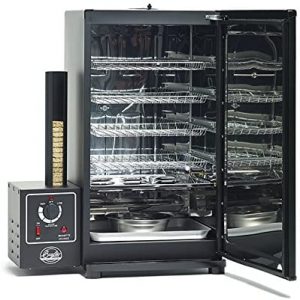 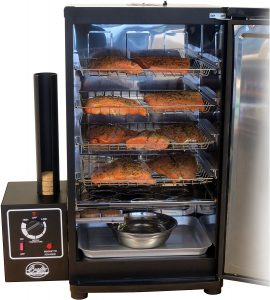 Pros of the Bradley Digital Smoker:

Cons of the Bradley Digital Smoker: 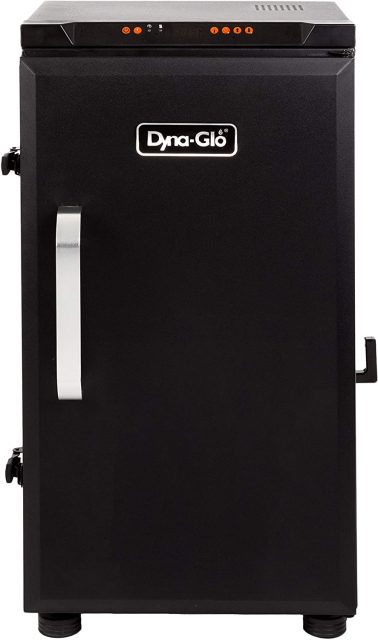 Masterbuilt is definitely a fan favorite. But, this similarly priced digital smoker from Dyna-Glo is a worthwhile alternative that also has a double latch door system and internally stored meat thermometer to monitor the progress of your cook without using a separate unit.

Dyna-Glo haven’t been around for as long as Masterbuilt (they started making their top rated offset smokers). But, they’ve got a solid reputation for manufacturing well-priced smokers that perform.

Just like the MB20071117, the Dyna-Glo DGU732BDE-D is powered by an 800 watt heating element. It’s well-sized for it’s 732 square inches of cooking space that’s split over 4 racks. And, there’s double-wall insulation around the firebox and a great door seal to minimize heat loss.

Simple, effective and well-priced, the Dyna-Glo DGU732BDE-D is a top unit that should only see it’s popularity rise as more people become familiar with the brand. 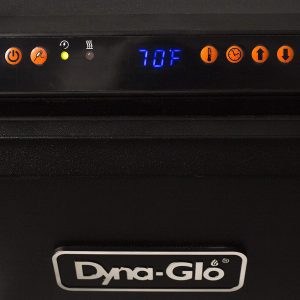 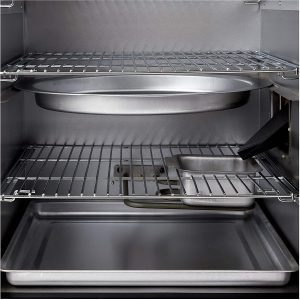 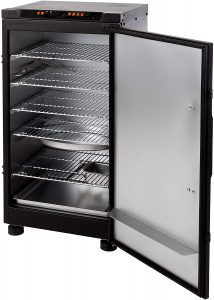 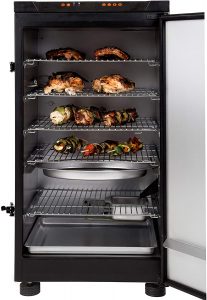 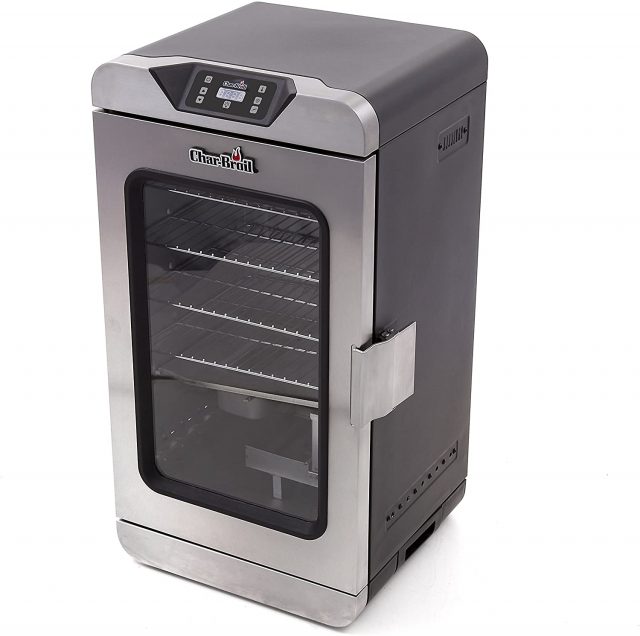 For anyone who likes to be able to peek at what they’re cooking without opening the door, slowing down the cook, the Char-Broil Deluxe 17202004 is our top pick.

Powered by a 750 watt heating element, you’ve got 725 square inches of cooking space that’s split over 4 racks. It’s fully insulated, boosting the smokers efficiency and reducing running costs. The extra large stainless steel side latch is easy to lock in place and also helps to keep the seal really tight.

Unlike our first two picks, the Char-Broil 17202004 doesn’t have a side-loading wood chip option. But, the wood chip holds 4 cups which theoretically gives you up to 7 hours of smoke production. We find it’s more like 4 hours. But, it’s still a decently long enough time that you’re not having to check on the smoker every hour or so.

The grease cup on this thing is also huge! Like holds 8.5 cups worth. Easy to use and easy to clean. You also get 1 meat temperature probe that’s removable for easy cleaning.

If remote control is also you’re jam, the Char-Broil 17202004 comes with a small remote. You can use it to see the temperature, set it, and, see how long you’ve got left. The working distance isn’t huge. But, it’s an easy way to monitor your cook without having to go outside again. 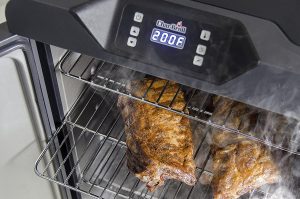 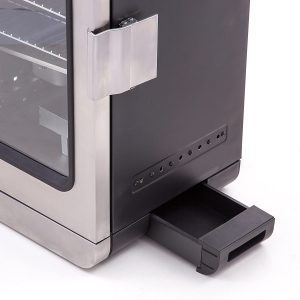 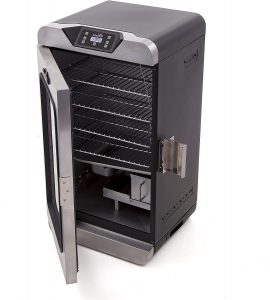 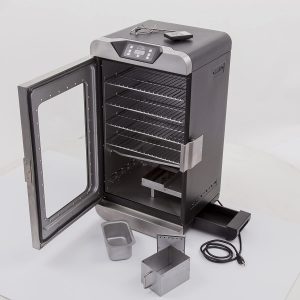 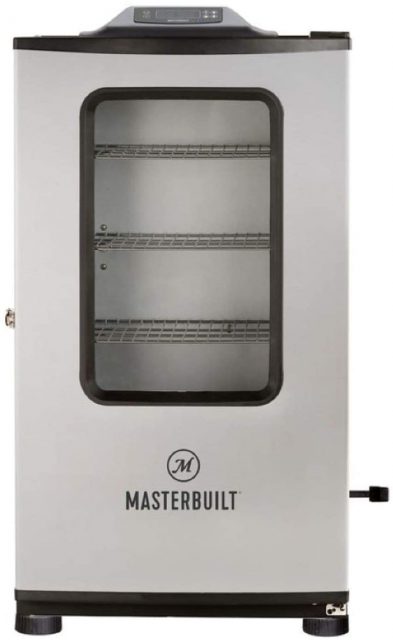 For anyone looking for an electric smoker with a wireless hook up, the Masterbuilt MB20074719 is our top choice.

Digital bluetooth electric smokers have terrible reputations for not working well. But, the MB20074719 breaks the mold by being such a solid smoker with a reliable connection that lets you adjust and check the cooking temperature, or turn the whole machine on or off from your phone.

The MB20074719 also comes with 1 internal meat probe so that you can see exactly how done your meat is. And, it’s temperature displays direct on your phone.

Just like all Masterbuilts, you get a convenient side-loading wood chip port, insulated sides, and, a heating element that’s big enough to power the space.

Available in both a 40″ and 30″ model, it’s also a great choice when it comes to a larger digital electric smoker. 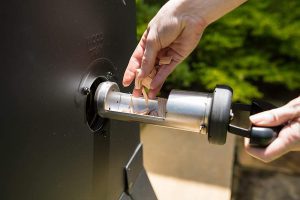 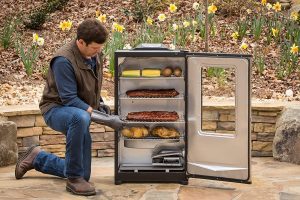 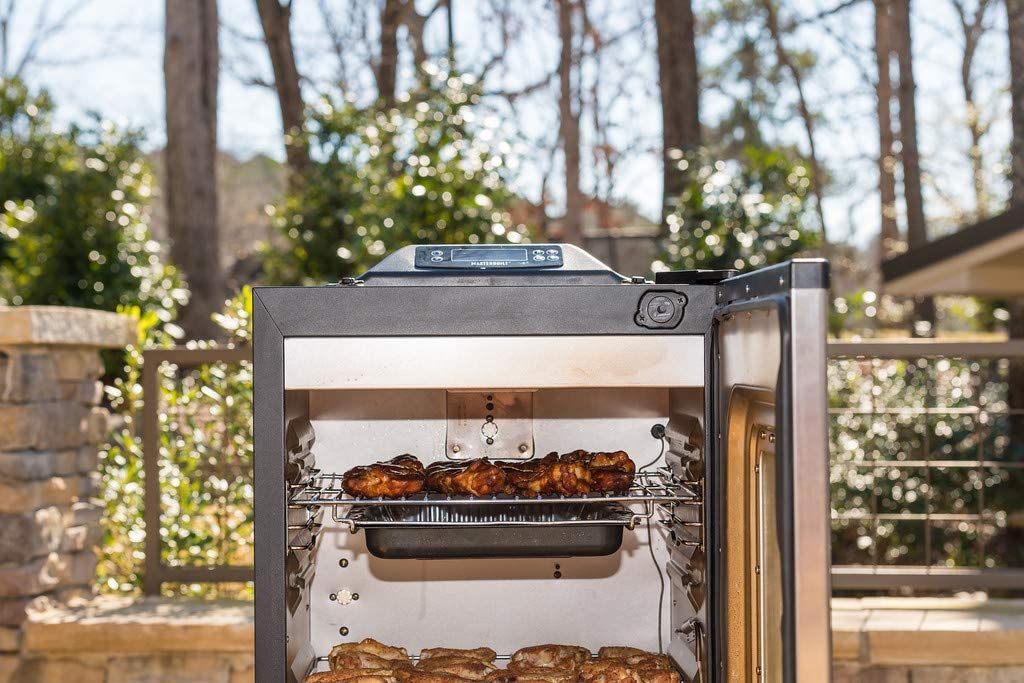 Best Electric Smoker Under 500? Pick One of These

There are so many different electric smokers out there, it’s probably one of the hardest types of smokers to pick. And, if you’re on a… Read More »Best Electric Smoker Under 500? Pick One of These 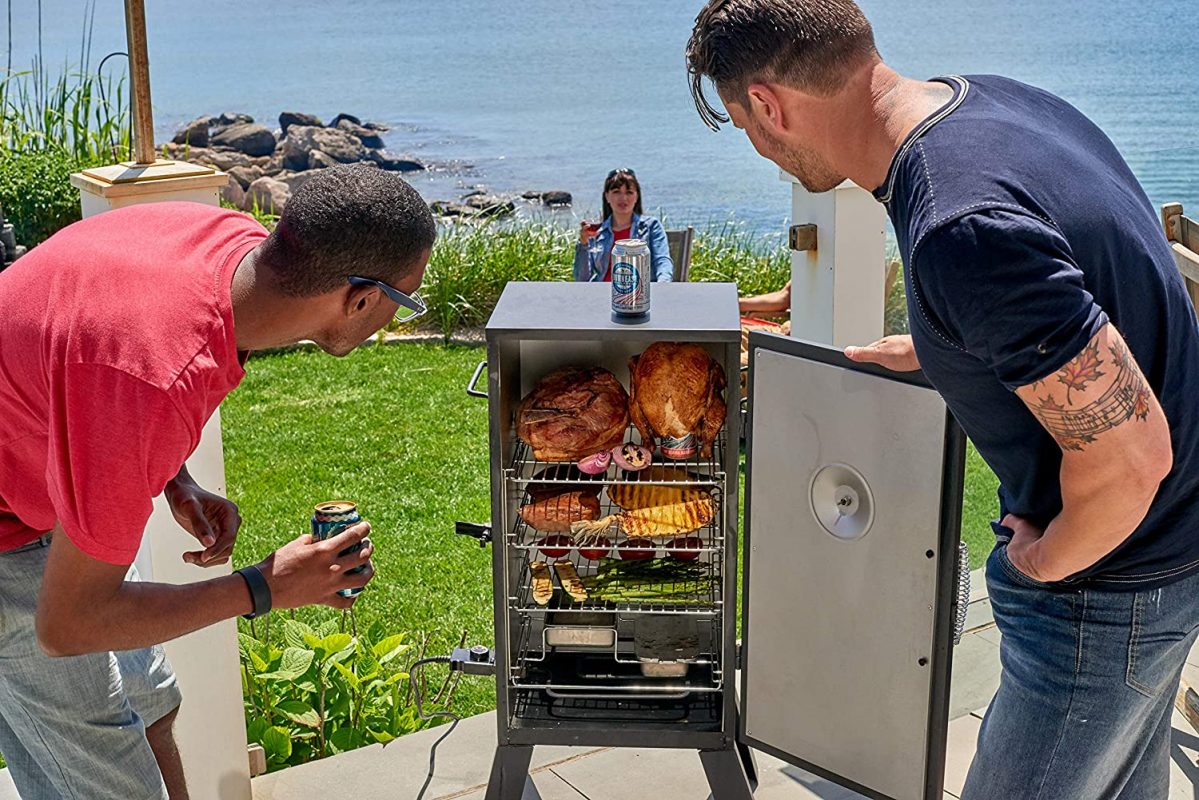 One of the best things about electric smoking is how cheap it is to get into. A few hundred bucks and you can buy yourself… Read More »Best Electric Smoker Under 200: These Cheap Options Perform! 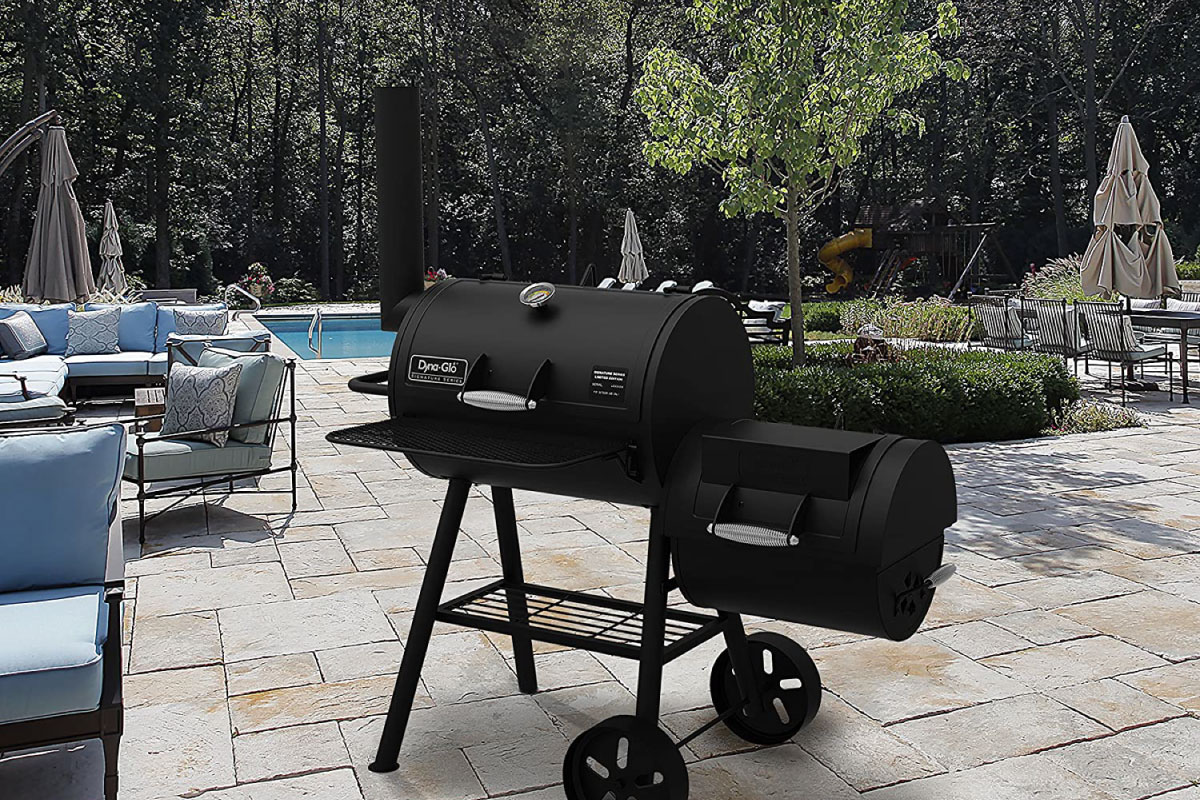 Best Offset Smoker Under 500? These 5 Are Top Performers

You’re not alone if you don’t want to or can’t afford to drop a couple of grand on an offset smoker. And, these days, nor… Read More »Best Offset Smoker Under 500? These 5 Are Top Performers